The football tournament at Hanoi Academy has come to an end. Two of our strongest teams 8A1 and 9A2 were in the semifinals.It was a stressful game but 8A1 came through and the score was 2-1.

Tung, a striker from 8A1, scored two goals to bring his team to the final. It was a game dominated  by  8A1. They stormed the goal of 9A2 but luckily 9A2’s goalkeeper was too good, but he still couldn’t bring victory for his team. Unluckily for 9A2 they had a chance to equalize the game but Trung their striker missed an important penalty. No one could blame him, it was a stressful moment. 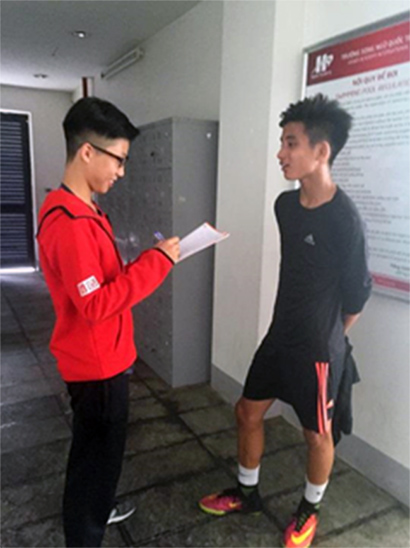 We interviewed Tung to get his view on the match

Unfortunately Phuc from 8A1 got a red card and was sent off. Tung was the player of the match. The crowd was cheering for both teams, it was an amazing atmosphere.

We interviewed the man of the match. Tung said “It was a very fun and exciting match, 9A2 played very well, luckily we had teamwork to beat them” 9A2 missed quite a few chances and part of it was that they were unlucky. After the win, 8A1 went into the final beating last year’s champion 9A2. We can see that youth can beat experience but you just need good communication and teamwork to win like every other sport. They beat 9A2 in the semifinals so in the grand final they dominated 8A2 to win the golden cup. The game against 9A2 was the key to their victory at HA football tournament.